Promoting Inclusive Electoral Processes in the ECOWAS Region through BRIDGE

Within the framework of a broader capacity building program, the ECOWAS Commission, organized a customized BRIDGE workshop on Access to Electoral Process which took place in Lomé, Togo from 02 to 06 August 2021. The training was organized in partnership the German Agency for International Cooperation (GIZ) and with financial support from the European Union.

The main goal of this initiative was to strengthen institutional capacities vis-à-vis the participation of under-represented groups in the electoral process, as well as to offer participants concrete tools for an enhanced planning process in this regard. The training brought together 24 senior officials from electoral commissions and independent election specialists in the region.

Almost every EMB in the region now has a Gender Unit, in respect of the ECOWAS Gender and Election Strategic Framework. In order to support the efforts made by the EMB’s in promoting inclusive electoral management, it was important to further tackle the issue of all under-represented groups. During the training, ECOWAS Member states adopted series of provisions to increase the participation of, not only women, but also the youth, persons living with handicap, internally displaced persons, ethnic minorities and other marginalized groups.

Participants discussed extensively international normative frameworks and the need to respect human rights for all, including political, civil and electoral rights. Participants also analyzed the obstacles to an effective participation of specific under-represented groups as well as the strategies that EMBs and other electoral stakeholders can put in place to overcome these barriers. At the end of the training session, participants developed and discussed improved administrative mechanism and principles to foster inclusion in electoral processes for their organization. Participants hoped that such a workshop could be replicated for their colleagues at national and sub-national levels of the various EMBs in West Africa.

The three ECOWAS working languages (French, English and Portuguese) was used by facilitators Theophilus Dowetin; and Luther Barou Y. Youkou, who received his accreditation as a workshop facilitator, after satisfying the needed requirements. COVID 19 protocols were strictly respected throughout the 5days. 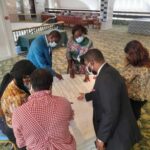 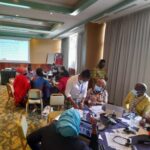 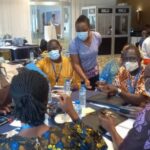