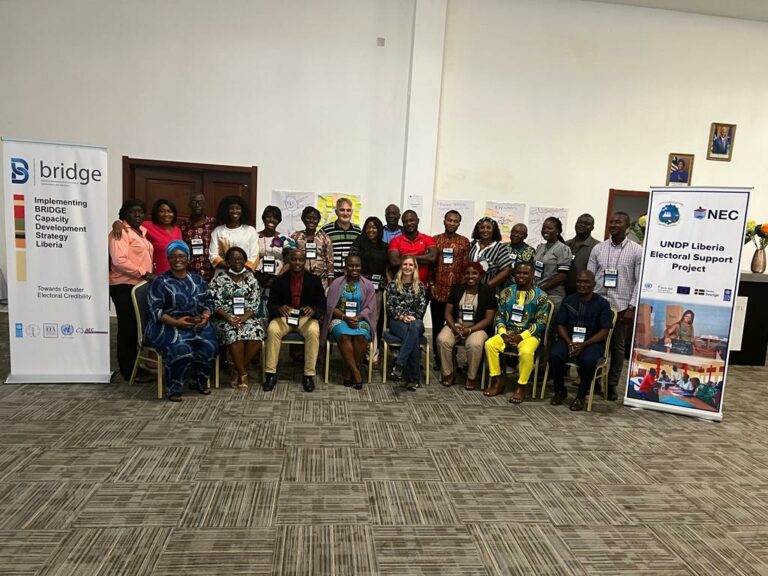 BRIDGE – a life-changing experience in Liberia

Beatrice came to her office, and she said, “we cannot work like this anymore.” Then she cleared and put her desc in order. She asked her colleagues to do the same. Then they put up the entire office and carboards in perfect order. “I am a BRIDGE facilitator now, and all things must be put in order,” she said. Kaka returned to the office and talked to her colleague; she claimed, “I thought I knew everything before I went to this BRIDGE TtF.” Immediately after the TtF, Samuka was organizing a media workshop, and he immediately reported back, sharing a photo to the WhatsApp group, “I ordered the room in a “BRIDGE” way.” These are only a few remarks we registered in the first week after the BRIDGE TtF in Liberia. The majority of the participants were always happy to comment about this enlightening experience for them as a life changer. In some cases, the tears were more expressive than the words. This engaging and challenging training, peer reviews, observations, and positive feedback, were conducive to the attitude-changing and life-changing experiences for the majority.

In a few words, the TtF in Liberia was all about selecting the best people, careful preparations, practicing, and more practicing, great presentations and not-so-great ones, a lot of feedback, learning, energizing, knowing each other better, positivity, and a lot of Liberian pepper sauce, Palava Sauce, Cassava leaves and Torborgee. These bonds are built for life.

The BRIDGE TtF Workshop was organized in Margibi county near Monrovia, Liberia. The Participants were carefully selected out of 240 received applications. Twelve from the National Elections Commission, including the Magistrate offices, and eight come from other elections stakeholders and Civil Society focusing on voters’ registration, Gender equality, Peacebuilding, and Media.

A team of two Liberian facilitators, Emma K. Togba and James S.B. Wallace, and two international Zage Filiposki (Macedonia) and an international facilitator from Zimbabwe customized the training, set the agenda, and coached the participants.

This TtF is the first event organized under the new BRIDGE Implementation Capacity Building Strategy of the NEC Liberia developed in collaboration with the UNDP Liberia Election Support Project. The training was enabled by the generous support provided by Sweden and Ireland. The follow-up modular workshops are already scheduled to take place in November 2022. They will support the NEC CVE and the Biometric Voter Registration exercise followed by a Gender and Elections.